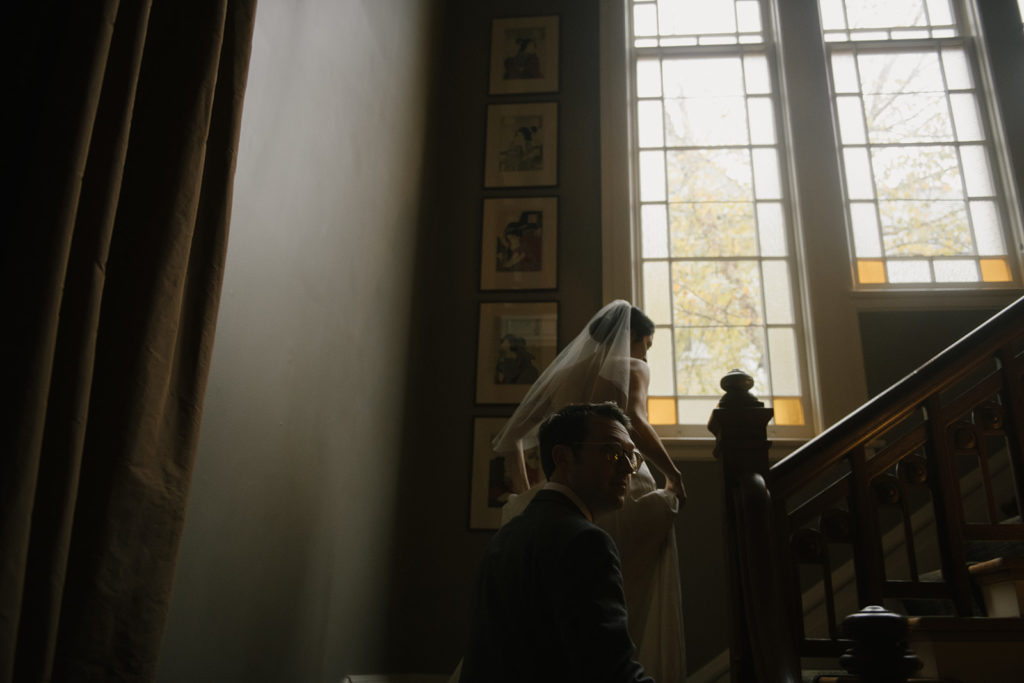 Wedding Photos and Portraits of the Week | Rangefinder

Did you see our most recent Photos of the Day? In our daily series highlighting some of the most interesting images in wedding and portrait photography, the editorial staff asks the creatives behind the photos to detail the backstory and technical approach. Here’s what caught our eye this week.

A Stunning Stairwell Scene with Meaning

The couple returned to the first home they lived in together for their wedding. They don’t live there anymore, but with it sitting empty, the landlord, who’s remained a friend, let them come back to it to exchange vows. Photographer Sophie Berard shot this frame at the landlord’s house, where the couple decided to take portraits with his show-stopping stairwell. “He was more than accommodating in helping me lower all the blinds in the other rooms and turn off almost all the lights in their home,” she recalls.

Over the river and through the woods, there’s a lovely area of secluded grove that photographer Will Stedman mentioned would be great for bridal portraits. The bride rallied her bridesmaids and found stepping stones across the river to reach the other side. Stedman took of his shoes and socks, rolled up his pants and waded in. He shot low near the river to blur the foreground and isolate the subjects. “I also made sure to position myself so the sunlight came from behind them,” he explains, “again to help pop them out from the background.”

Reality of the stay-at-home order due to the spread of COVID-19 set in for a mother and her son, who suddenly found themselves in the roles of teacher and student. After a few weeks of their new homeschool routine, Karen Osdieck recalls her son explaining through tears what he missed about school and what wasn’t working at home. The pro, they discovered together, was that he could wear whatever he wanted to. “He has always had an eclectic fashion sense,” Osideck says, “so I started taking portraits of his ensembles. The process of assembling his outfit and then photographing them is what saved us.”

Braving the Elements at a Wet and Windy Waterfall Proposal

Mick and Ash of MIKI Studios were hired for a proposal shoot at Skógafoss falls in Iceland, which the soon-to-be fiancée thought was a couples shoot. The photographers decided to stay vague in their direction in order to let the boyfriend direct the moment and do what he wanted. Standing by the main waterfall, the couple was getting hit with watery gusts of wind, fully enjoying themselves, “enjoying the moment, enjoying the surroundings and the awe-inspiring beauty of Iceland’s most iconic landscape, even if they are getting wet,” Mick and Ash say.

In a scene that looks like it’s straight out of the The Sound of Music, photographer Filip Eremita documented a mountaineering couple for whom it “felt natural” to exchange vows so high in the sky: at the base of Ojstrica, in the Slovenian Kamnik-Savinja Alps. “This specific frame was taken spontaneously,” the photographer says, “as the couple was walking to the little chapel in which they got married.”

Dig into the Photo of the Day archives for more.

The post Wedding Photos and Portraits of the Week appeared first on Rangefinder.

Get back with Booking.com

Makeup Tips: How to use Fixing Spray// ARTDECO