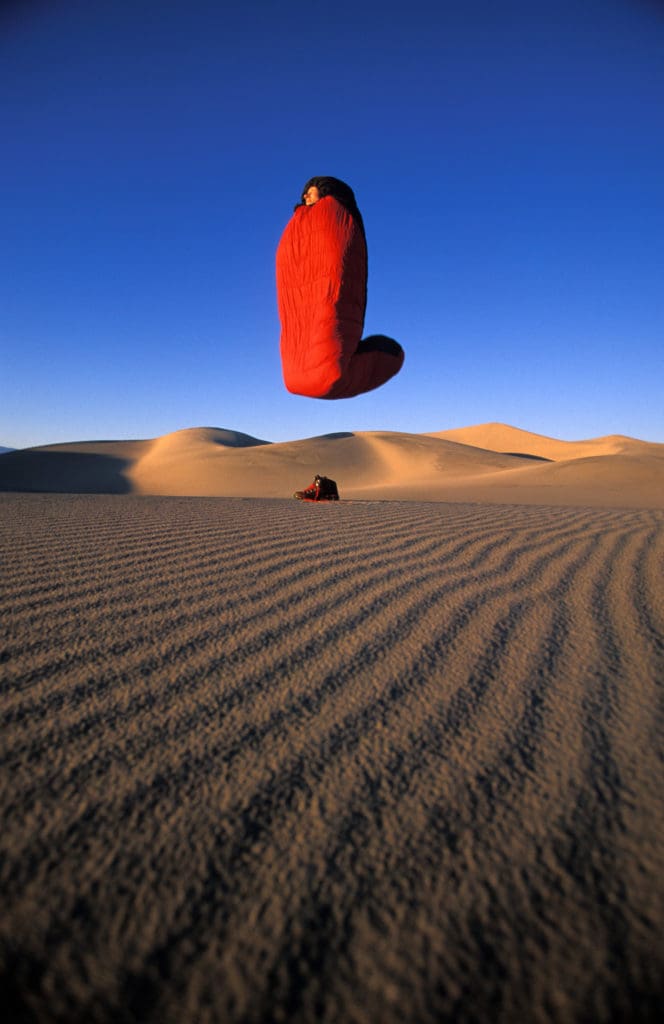 The Story Behind the Image | Rangefinder

This surreal image is just one of several featured in celebrated outdoor photographer and Nikon Ambassador Corey Rich‘s new book, Stories Behind the Image: Lessons from a Life in Adventure Photography (Mountaineers Book). As reviewed by our writer Jim Cornfield, “the book is both a beautiful and practical blend of breathtaking images and behind-the-scenes breakdowns, all driving home the concept that Rich embodies in his work, that the creative process takes patience and perseverance.”

As Rich himself explains, “It takes time to make interesting photographs—even for the most veteran, experienced photographers out there.”

Shown here is model Ashley Laux jumping in the air in a sleeping bag, which Rich say perfectly embodies this slow, creative process. “Several years ago, I was in Death Valley on assignment for Backpacker to shoot department openers for their Gear Guide,” he explains. “It was a cold and windy day. I was shooting a tent camping scene in these sand dunes when I turned my head and saw Ashley bundled up in her sleeping bag, trying to stay warm. I was struck by the stunning panorama before me—the red sleeping bag, the hiking boots with red boot laces, and the beautiful untouched patterns in the sand.”

Rich says he turned all of his attention to Ashley and began the slow, methodical process of creating an interesting photograph. “I walked back and forth, looking for just the right angle. Then, I began working with Ashley. I shot a lot of photos of her just standing there, bundled in her sleeping bag, but the horizon lines behind her were running into her legs.”

Next he had her jump, which solved the problem of the horizon lines but because Rich himself was standing up, the angle wasn’t quite right. “So, I laid down in the sand and Ashley jumped some more,” he describes. “Now things were getting much better. The new angle really added height and drama to her jump, and Ashley was having fun, which helped immensely.” Ultimately, the little touch that sealed the deal for Rich was when Ashley jumped and added a slight, playful bend in her legs. “At that point, I realized that we had reached the apotheosis of this idea. We’d gone from a snapshot to an OK, to a better, to perhaps even good picture.”

To see more of Rich’s dazzling images and read about the creative processes that went into them, check out the 288-page book, which comes out September 1 ($29.95). Cornfield’s full review of the book will be available on rangefinderonline.com in September.

The post The Story Behind the Image appeared first on Rangefinder.

Makeup Tips: How to use Fixing Spray// ARTDECO