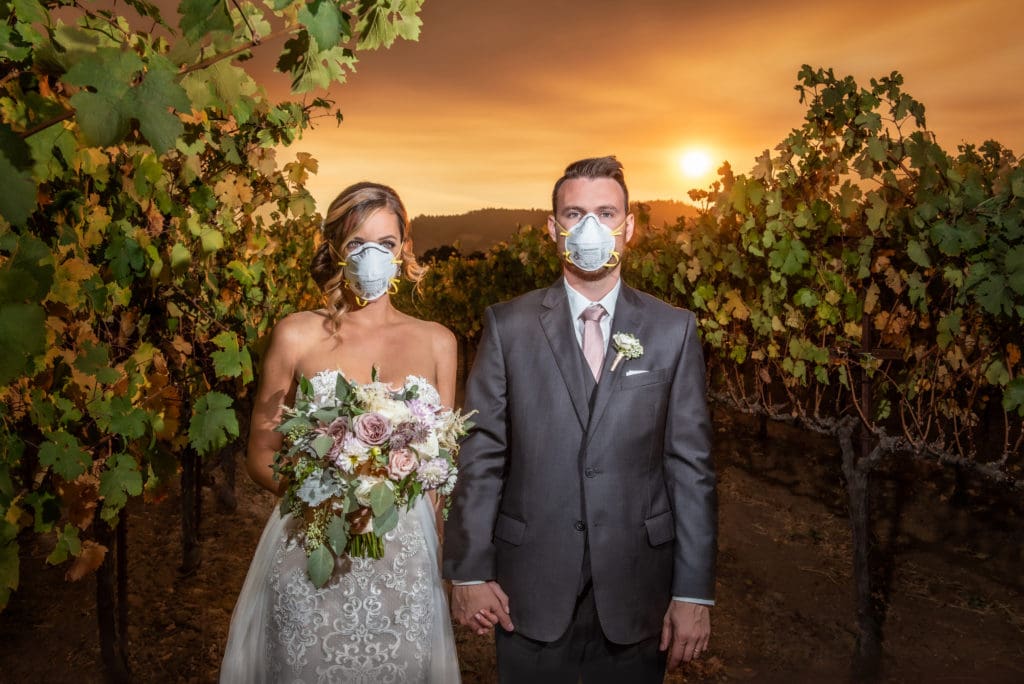 This image, taken during the wedding of Katie and Curtis Ferland at Chateau St. Jean in Kenwood, California, this past October, was created by photographer Karna Roa in the style of the 1930s painting American Gothic by Grant Wood.

“The original painting, of a farmer and his daughter, depicted normal life in 1930 in the United States,” Roa explains. “As the bride and groom here stood in the vineyard with masks, I wondered if this was the ‘new normal’ for California wine country in 2019, as smoke from the Kincade wildfire was bearing down in the background, creating an orange sky around the sun and the couple as they wore respirator masks.”

When the wedding coordinator suggested that they take at least one photo with the air filter masks on, Roa’s initial reaction was, Why would we do that? But a second later, she was already imagining her clients at age 80 looking at their wedding album and being able to still feel what it was like to be there. “The Kincade fire, unfortunately, was a huge part of their story. The orangish-brown sky and red sun were the backdrop, and them with the masks on was what it felt like to be there.”

But that was just the beginning for this particular image, which went viral almost immediately after Roa posted it to Facebook.

“The wedding happened on Saturday, October 26the,” Roa recalls. “My city of Castro Valley, California, was without power for three days, so I went to a friend’s house with my laptop and memory cards on Sunday to download and backup the wedding images. Before leaving, I pulled out the one image of the couple in the masks because I thought it was very relevant, since the fires were still in full force. I posted it on my personal Facebook page and shortly after, a colleague asked if she could share the image with her local professional photographer’s Facebook page—causing me to change the privacy setting from private to public.”

Another photographer across the country in St. Louis then asked Roa why the couple was wearing masks. “She didn’t know anything of the California fires, which led me to add the #KincadeFire to my post. Within an hour, I was contacted by ABC News, and then shortly thereafter, I received a call from a producer at Good Morning America. By the next day, I had spoken on camera to ABC, NBC, CBS and FOX. And by the very next morning, it had been on Live with Kelly and Ryan, CBS This Morning, the Today show and numerous other national shows.”

After the image spread internationally as well, Roa was asked twice to interview with BBC World News and two national news programs in Canada for CTV and CBC. Once Roa realized how many countries were talking about climate change because of her image, she was on board with having more and more people see it.

“I was interviewed by an iHeartMedia radio show and then it spread throughout radio shows across the country,” she says. “It is shocking how fast media can spread. I believe it was printed in newspapers in almost every major city in the U.S. and in about 20 countries throughout the world, and ran in PEOPLE, Travel + Leisure, The Guardian, USA Today, Allure magazine, Insider magazine, HuffPost, The Weather Channel, AccuWeather, and a whole host of other places. It was a completely overwhelming experience. And one of the more incredible ways the image is being used is in The Guardian‘s Pictures of the Year edition for 2019.”

The post The New American Gothic appeared first on Rangefinder.