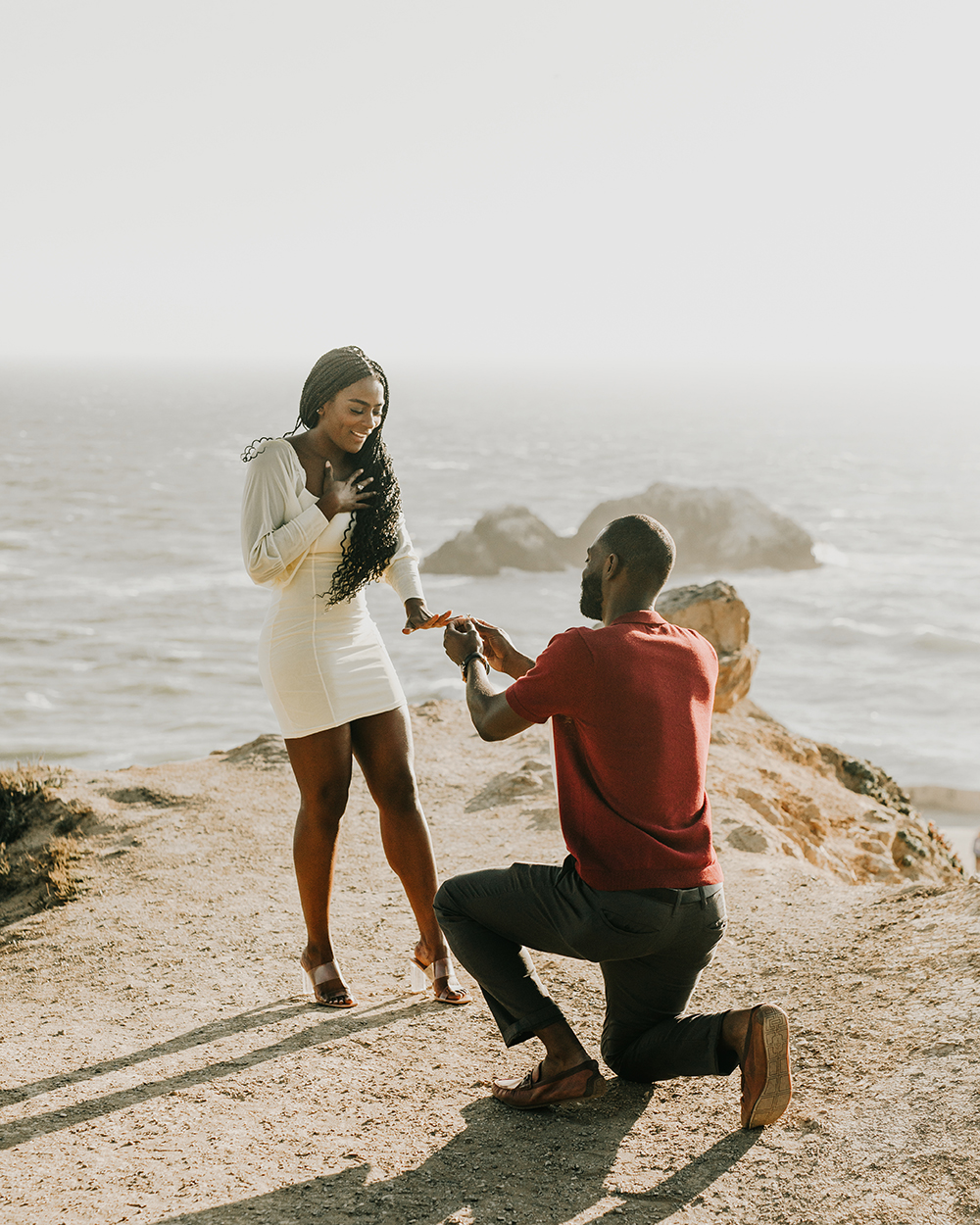 Photographer Irina Ventresca had never photographed a proposal before, but when Terrelle, who planned to ask Jaime to marry him, asked her to document the event, she was down to give it a try.

“Terrelle brought up the fact that he typically doesn’t plan anything months in advance,” Ventresca explains, “however, he finds that Jaime often plans extravagant events for friends and she is never the focus. He wanted her to have an experience that is completely about her, without her having to do anything but enjoy the moment.”

Keen to propose at sunset, Terrelle chose to do it at Sutro Baths in San Francisco. “I had sent Terrelle several galleries of the area, having shot there several times before,” the photographer says. “We FaceTimed again to confirm the exact spot after he went to visit himself, as it was his first time there.”

On the day of the proposal, Ventresca arrived a couple of hours in advance to make sure she’d have time to park her car and scout the area. Her planning came in handy—Terrelle, who took Jaime to a nearby wine tasting to celebrate their two-year anniversary, called Ventresca to let her know they’d be there an hour early. “Boy, was I happy I had arrived early,” she recalls. “I texted him a photo of the spot where I was setting up so he could confirm. He called me from the restroom saying that everything was looking good and that they were on their way over.”

In the meantime, Ventresca got her settings prepped and took some practice shots. She did not want to miss the moment when it came. “There were lots of other people around and I had gently informed them that a proposal was about to happen any minute and asked if they could come back in about 10 minutes or so, or move a little bit off to the side. They were more than willing to do so!” Pretending she was a landscape photographer, Ventresca got into position, close enough to see the couple walk down the path to the proposal spot.

A few minutes later, they arrived. “Terrelle took Jaime to the edge where you can see the entire view of Sutro Baths and the ocean,” Ventresca says. “It was absolutely gorgeous that day. She was giddy and excited and began taking photos on her phone. She even told Terrelle, pointing at me, ‘Hey look, there’s a photographer. We should ask her to take our photo!’ To which Terrelle replied, ‘Maybe later,’ with a grin. Then he took her hands and started saying sweet nothings that I couldn’t hear, and I started firing away as he got down on one knee. I had also propped up my iPhone on a post to record the whole thing for them too!”

The photographer continues: “She was in shock and kept questioning ‘Is this real?!’ Meanwhile, I am getting closer and closer taking photos until she realized what was happening and started laughing in disbelief. Terrelle at this point told her how he hired me months ago to document this special day for them and she was grinning ear to ear. She called a few family members to show off the ring and tell them the good news, and even got a little emotional when calling her brother, who was over-the-moon excited for them.”

The next hour was spent shooting portraits while exploring the area, “all the while Jaime trying to process what had taken place. After the shoot was over, they headed over to a restaurant to have dinner and enjoy the rest of their anniversary—one they will never forget.”

The post A Surprise Proposal appeared first on Rangefinder.